Top 30 Retail Trends in February
Next
Set of
Related
Ideas 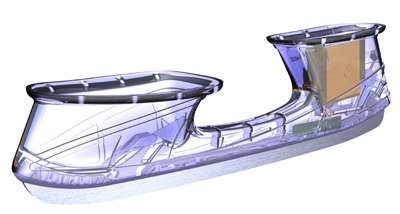 Bianca — October 19, 2007 — Lifestyle
References: krisabel.ctv
Share on Facebook Share on Twitter Share on LinkedIn Share on Pinterest
Thermablades, a unique new invention, could revolutionize the sport of hockey, making it a whole lot faster. The blades are heated by a small electric current, creating a thin layer between the skate and the ice that allows players to make tighter turns, smoother strides, and skate a whole lot faster, particularly, in when making quick starts.

"The Thermablade takes a traditional steel blade and connects it to a special plastic mold that contains a heating wire, microprocessor, and proximity sensor," Krisabel said.

"When turned on, these will heat the blade to a consistent temperature of 5 C degrees, not hot enough to melt ice, but warm enough to increase the microscopic layer of water that exists between ice and steel. The company describes the effect as having a pair of mini Zambonis in front of your feet."

Hockey legend Wayne Gretzky is very excited about the idea. "I first heard about Thermablade because of my involvement with Team Canada-Hockey Canada. My first reaction was, 'Where was that when I played?'"

The blades were created by Calgary inventor, Tory Weber. The inspiration came to him on a cold Alberta morning while he was a student working at a lumberyard. On his way out the door, he slipped on warm shoes he had left on the heater, and the second he stepped onto the ice, took a hard fall from the slip. Now he's managed to convince even hockey legends like Gretzky that this could forever change the sport.
4.6
Score
Popularity
Activity
Freshness
Jeremy Gutsche Keynote Speaker