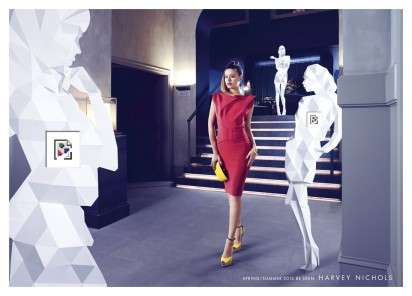 The Harvey Nichols SS12 Campaign Encourages People to Be Seen

Meghan Young — April 16, 2012 — Marketing
References: yr & ibelieveinadv
Share on Facebook Share on Twitter Share on LinkedIn Share on Pinterest
The Harvey Nichols SS12 campaign appeals to a person's sense of self and desire to be noticed. Although many people don't care to be the center of attention, there are very few people who would want to walk the earth being completely ignored. With great style, being ignored is impossible. With not so great style, people may as well be walking broken images like those found on a faulty website, according to the ad.

Conceived and executed by Y&R, an ad agency based in Dubai, United Arab Emirates, the Harvey Nichols SS12 campaign hones in on that one attention-grabbing individual while simply stating, "Be seen." Art directed by Kalpesh Patankar with creative direction by Shahir Zag and Kalpesh Patankar, the ad campaign was photographed by Dimitri Daniloff and designed by Creative SweatShop.
5.3
Score
Popularity
Activity
Freshness
Get Better and Faster