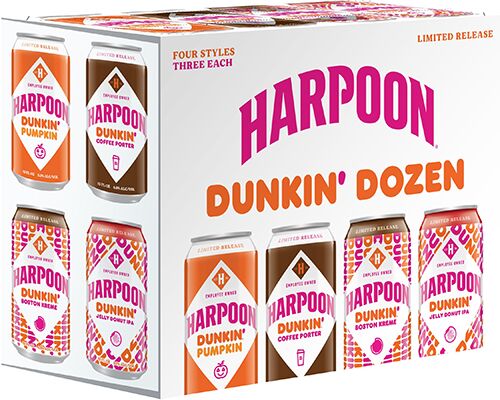 Michael Hemsworth — August 26, 2020 — Marketing
References: harpoonbrewery & drugstorenews
Share on Facebook Share on Twitter Share on LinkedIn Share on Pinterest
The latest Harpoon Brewery x Dunkin' beers have been unveiled to offer consumers an alternative way to enjoy their favorite donut flavors and satisfy their craving for high-quality beers. The beer range includes Pumpkin, Boston Kreme, Jelly Donut and Coffee Porter, which each features an ABV of 5.2%, 4.3%, 5.7% and 6%, respectively. Pumpkin has been brewed with real pumpkin pie pieces in the mix, while Boston Kreme and Jelly Donut have been made with real donuts, and the Coffee Porter is made with Dunkin's original blend coffee.

Harpoon CEO and Co-Founder Dan Kenary spoke on the latest Harpoon Brewery x Dunkin' beers saying, "After more than two years and three seasons of collaborating with the Dunkin’ team, our fans have come to expect a delicious fall beer from us, but we wanted to give them something extra special this year. Our brewers have always been master innovators, but brewing beer made with real donuts was a first even for them. It's hard to pick a favorite of the four recipes — just like it's hard to pick a favorite donut from Dunkin’ — but we hope both our and Dunkin’s fans have a blast trying.”
4.6
Score
Popularity
Activity
Freshness
Get the 2021 Trend Report FREE