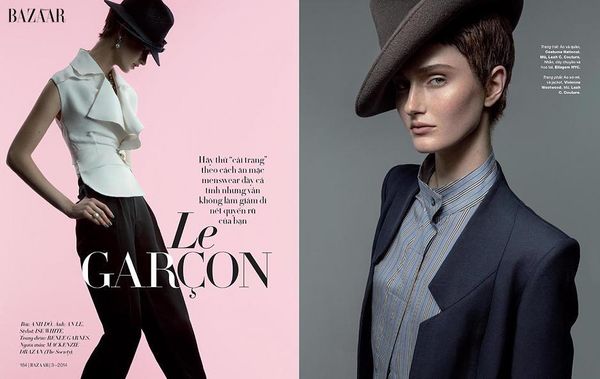 Meghan Young — May 5, 2014 — Fashion
References: facebook & fashionising
The Harper's Bazaar Vietnam 'Le Garcon' editorial embraces menswear-inspired outfits in the vein of Coco Chanel. By channeling the femininity of such androgynous looks instead of fully embracing their masculinity, there is an undeniable charm that would make both men and women indulge in a second look. A woman doesn't have to flaunt her curves in order to make a statement.

Styled by Ise White, the Harper's Bazaar Vietnam 'Le Garcon' editorial channels a retro glamor while also imbuing it with a modern edge. It stars model Mackenzie Drazan, who posed in studio against pink and gray backdrops. She was shot by photographer An Le wearing a variety of pantsuits, each one showing off a different silhouette alternative to the next. Hair stylist Elsa Canedo and makeup artist Renee Garnes were on beauty duty.
5.7
Score
Popularity
Activity
Freshness