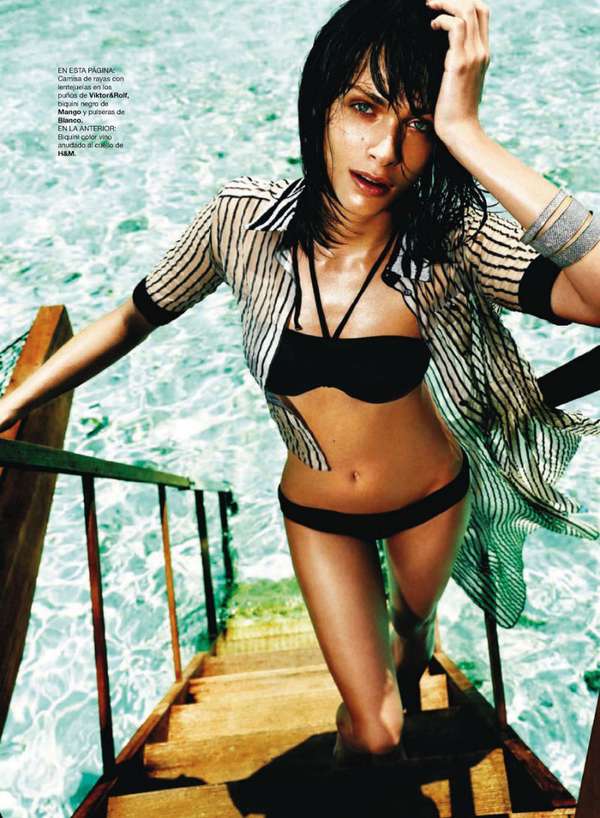 Jordan Sowunmi — July 13, 2011 — Fashion
References: harpersbazaar.es & fashiongonerogue
Share on Facebook Share on Twitter Share on LinkedIn Share on Pinterest
One look at the aplomb with which Italian supermodel Elisa Sednanoui sports a series of upscale bathing suits for the Harpers Bazaar Spain July/August 2011 issue and it's easy to see why Sednanoui has become the darling of fashion photographers and major fashion brands around the world.

The 24-year-old dominates the shoot by deftly alternating between the sultry and alluring eyes at the camera in one shot, and then exuding a carefree casualness in another. The Harpers Bazaar Spain July/August 2011 shoot also highlights some of the fashion world's most formidable designers. In the shoot, Sednanoui is clad in powerhouse brands like Emillio Pucci, Valentino and Dolce & Gabbana, each outfit accentuating her slender frame.

This Harpers Bazaar Spain July 2011 cover isn't the first major magazine cover for Sednanoui this year, she is fresh off an Italian ELLE cover this past February. With the fashion world on lockdown, up next for Sednanoui: movies. She will be appearing in two major Italian motion pictures coming out next year.
3.3
Score
Popularity
Activity
Freshness
Jeremy Gutsche Keynote Speaker