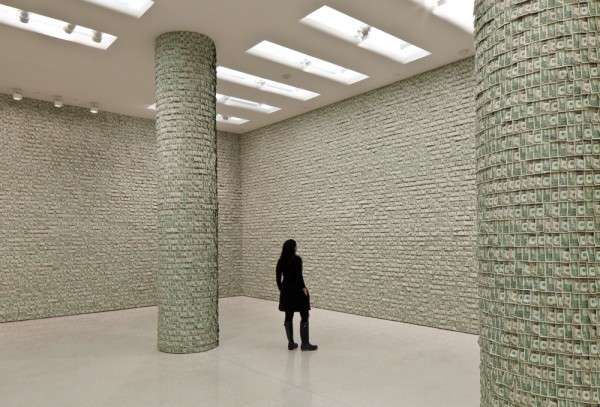 Hans-Peter Feldmann Hangs $100,000 in $1 Bills on the Guggenheim Walls

Corinne Guirgis — May 28, 2011 — Art & Design
References: nytimes & thisiscolossal
Share on Facebook Share on Twitter Share on LinkedIn Share on Pinterest
One room, four walls and $100,000 dollars later, the Guggenheim Museum in New York has a new exhibit designed by German artist Hans-Peter Feldmann. In November, Feldmann was awarded the $100,000 for winning the Hugo Boss Prize and is using the display as an art form to symbolize the relationship that should exist between money and art.

Feldmann was quoted by the New York Times as saying, "I'm 70 years old, and I began making art in the ’50s. At that time there was no money in the art world. Money and art didn’t exist. So for me $100,000 is very special. It’s incredible really. And I would like to show the quantity of it."

It took 13 days to pin down the 100,000 out-of-circulation bills. The striking, brilliant exhibition began May 20 and will continue to November 2, 2011. The trip to New York to see this one-of-a-kind exhibit may just be worth your dollar!
1
Score
Popularity
Activity
Freshness
Access Advisory Services

$6.2-Million Spirits
Isabella Islay is the World's Most Expensive Whiskey