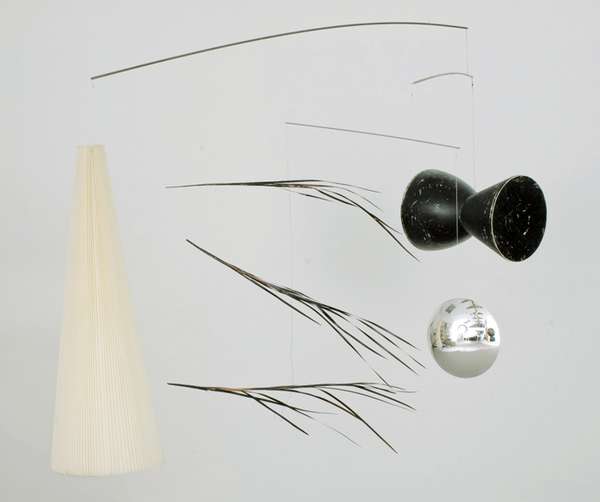 Meghan Young — May 16, 2012 — Art & Design
References: hannasandin & itsnicethat
Share on Facebook Share on Twitter Share on LinkedIn Share on Pinterest
Hanna Sandin creates abstract art inspired by baby mobiles and, more appropriately, the work of the late Alexander Calder. Simple, quirky and beautifully delicate, her sculptural works present everyday objects in an uncommon way, which is a departure from Calder's creations. By doing so, Hanna Sandin strips away their original purpose, conforming them to contemporary art instead.

Initially unrecognizable and minimalist, Hanna Sandin uses such items as blades of ceiling fans, palm fronds, mop heads and more. Hung on thin strings with equally slim black lines above, the mobiles end up having a two-dimensional aesthetic, almost as though they were a drawing rather than a three-dimensional sculpture.

Through her visual representations, Hanna Sandin playfully examines the meaning of such objects as well as their place in the world and in people's lives.
2
Score
Popularity
Activity
Freshness
Get Better and Faster