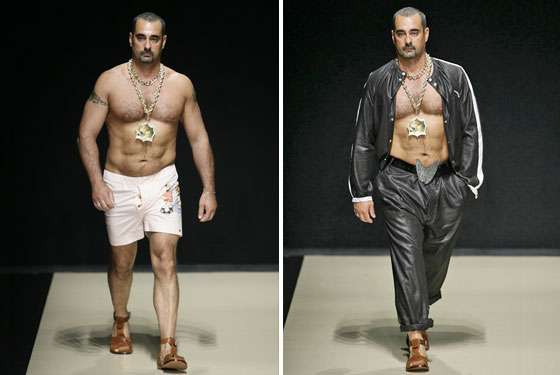 mediterranean — June 26, 2008 — Fashion
References: nymag & telegraph
Share on Facebook Share on Twitter Share on LinkedIn Share on Pinterest
Vivienne Westwood’s spring/summer 2009 menswear Milan show has sparked controversy and debate due to the designer’s decision to cast Roma gypsies as catwalk models. The models sported gold teeth and enormous medallions with rough looks and an abundance of tattoos. Westwood’s models were dressed as “rough, stylish and hardened” Roma as part of her show’s theme of ‘tolerance’.

Xenophobia is a touchy subject in Italy, where many Italians blame gypsies and immigrants for much of the crime in the country.

Tiziano Maiolo, a member of the Milan council criticized Westwood’s show, “I think the designer has a romantic notion about gypsies that is one hundred years out of date.” He goes on, “If she wants, I will take her on a tour of the nomad camps. These people do not want to work, they live by thieving and they have no respect for the law.”

The collection featured shirts with their sleeves rolled up and their half ripped off cuffs, drop crotch pants with oversized buttons, muscle tees, boxer shorts, square-toe carpetbag shoes, and oversized belt buckles.

I say, good job Ms. Westwood. You have sparked interest and dialog on an important topic and have shown that real men who are not skins and bones can successfully flaunt the latest fashion designs on the runways.
6.6
Score
Popularity
Activity
Freshness
View Innovation Webinars