Male Florals and Shades of Blue 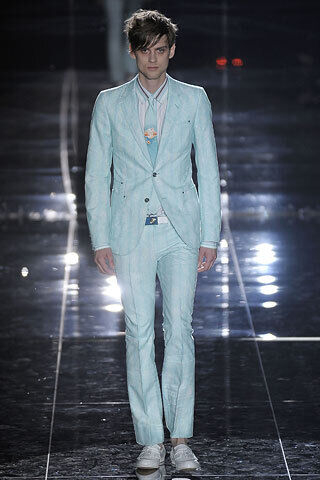 Bianca — June 25, 2008 — Fashion
References: men.style
Share on Facebook Share on Twitter Share on LinkedIn Share on Pinterest
The powder blue suit has been the route of many jokes about the fashionably challenged male, but Gucci is reintroducing it as a staple of the sartorially savvy. To complete the look, the outfit is paired with cotton candy blue loafers baring royal blue tassels.

The baby blue, tailored suit was just one of the impressionable looks Frida Giannini showcased in Gucci's Spring 2009 menswear collection. In fact, it's tame when compared to the rest of the season's line, which Giannini defined as "happiness."

Another notable, recurring elements among the Italian fashion line were jungle-themed details, with vibrant colours one would imagine to erupt in a rainforest scene. Flower themes were recurring, from the prints on shirts to the brilliantly detailed paintings on shoes.

The gallery shows some of the most remarkable looks of Gucci's show, including a cobalt blue mesh sweater over a turquoise tank and a deep-sea blue, giant murse. Completely out of place in the line, but much deserving of a mention, are the bubble gum pink pants featured nearer to the end of the show, also featured in the gallery.