Bustaurants
Next
Set of
Related
Ideas 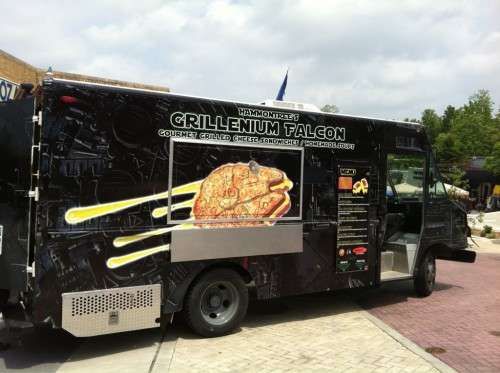 The Grillenium Falcon is Inspired by Star Wars

Meghan Young — May 25, 2011 — Lifestyle
References: fayettevilleflyer & foodista
Share on Facebook Share on Twitter Share on LinkedIn Share on Pinterest
The Grillenium Falcon caters only to the most devoted of Star Wars fans. So devoted, in fact, that they would travel from the farthest reaches of the world to Fayetteville, Arkansas, in order to indulge their intergalactic grilled cheese sandwiches. I'm sure they'd travel even further if those grilled cheese sandwiches actually do take the shape of a Millennium Falcon as pictured on the side of the truck.

Brought to you by Hammontree’s Grilled Cheese, the Grillenium Falcon made its debut at the first-ever Block Street Block Party on May 22, 2011. Owners Chad and Alison Hammontree reveal that the mobile restaurant will not only serve their signature grilled cheese sandwiches, but also two new other sandwiches, a few salads and several homemade soups.