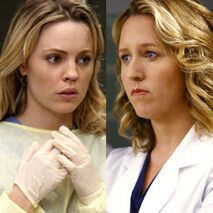 The firing of Brooke Smith, aka Dr. Erica Hahn, comes just when we thought lesbianism has been finally culturally accepted (what’s with the Summer’s #1 hit being Katy Perry’s “I Kissed a Girl”, Versace using lesbian-themed ads and Kylie Minogue declaring that she is considering lesbianism).

And we’re not the only ones left dumbfounded by the sacking of Brooke Smith and her character. In fact, Patrick Dempsey (Dr. McDreamy) couldn’t help but express his frustration and surprise at the move in an appearance on The Ellen DeGeneres Show to ‘diplomatically’ address the issue.

“ABC’s response ... is that [I] should say: ‘We’ve had a great time working with her and that the conclusion of her [character] has been orgasmic’—I’m sorry, I’m dyslexic!—‘organic’ ending to the story line.’,” joked Dempsey.

He continued, “Thursday night is her last show, which is too bad she has been great character. I don’t know what happened with that story line. They decided not to continue it for some reason.”

Naturally, Grey’s Anatomy creator and executive producer Shonda Rhimes denied any anti-gay agenda behind the decision, “Brooke Smith was obviously not fired for playing a lesbian. Clearly it’s not an issue, as we have a lesbian character on the show _ Calliope Torres.”

So should we jump into conclusions of a systematic ‘cleansing’ of gay characters by ABC or is it just a creative choice by the writers? It is worth noting that a September tally by the Gay & Lesbian Alliance Against Defamation counted seven characters that are either gay men or bisexual women (now down to six after the firing of Brooke Smith) in ABC’s fall schedule, which is the most of any broadcast network.