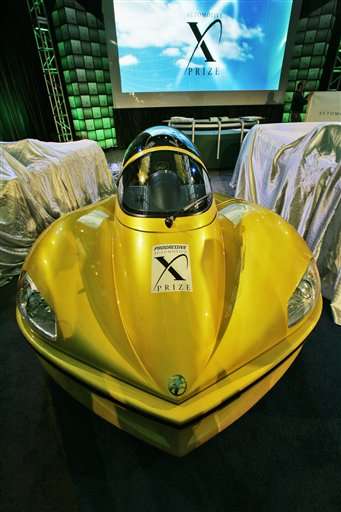 The latest X Prize challenge was announced at the New York Auto Show, and this year they're challenging creative innovators to come up with an eco-friendly car that people would be happy to buy and cruise around in. It has to be "viable, clean and super-efficient" and encourage society to "break our addiction to oil and stem the effects of climate change," according to the foundation.

60 teams from around the world have already signed on to compete for a $10 million purse. They have to be more than cool concept design; they've got to be ready to be put on the market. The teams have to design the cars, build them, and then put them to the test in both the Qualifying Race and the Grand Prize Final which will take place in 2009.

"In the races, the cars will have to hit a minimum speed and achieve a fuel efficiency of at least 100 miles per gallon of gasoline energy equivalent," Yahoo news explains.

Each car has to have at least two seats, but after that, requirements depend on the division being entered. One is the tradition class which seats four or more and rides on four wheels. They have to be able to go from 0-60 in 12 seconds and go at least 100 mph; these are most likely to become mainstream. The alternative class, however, is the where the fun designs come in; there is no restriction on number of wheels, and they have to go at least 80 mph.

Here's one design that plans on entering: