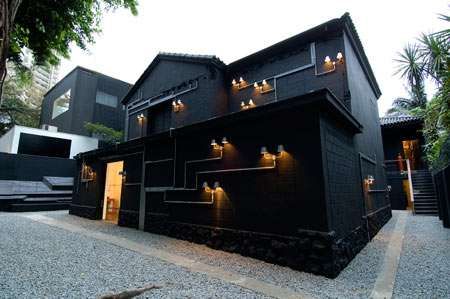 First the exterior of the structure was painted a stark black which created contrast with the silver-tone conduit. Then rows of parallel pipes containing the wiring were attached inside and out, ending at junction boxes and branching to pairs of matching lamps. The shades are brushed metal outside, creating a dramatic down-lighting effect, and translucent material indoors allowing for more light to emit.

I love the modern effect, especially on the dark walls and surrounding the massive stone fireplace.

The project by Triptyque was commissioned by the neighbour next door, a furniture and homeware store called 'Micasa'.
1.8
Score
Popularity
Activity
Freshness
Attend Future Festival