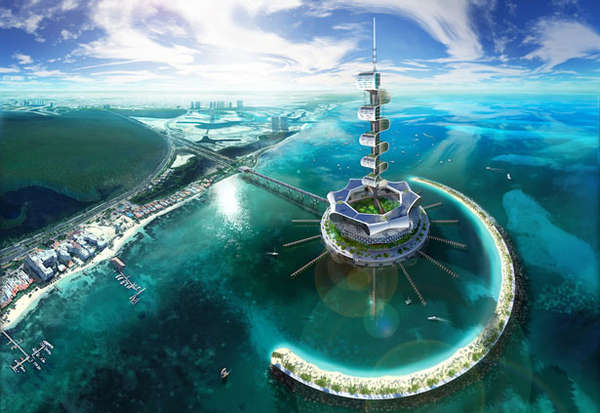 The Grand Cancun Aims to Clean up the Mexican Resort Town

Michael Hines — June 15, 2013 — Eco
References: richard-architecture-design & tuvie
Share on Facebook Share on Twitter Share on LinkedIn Share on Pinterest
The Grand Cancun is an ambitious concept building designed to celebrate the 50th anniversary of the founding of Cancun. It was designed by Richard Moreta Castillo. The 50th anniversary of Cancun is 2020, and the Grand Cancun is meant to address the environmental problems which may very well plague the city come that date. In addition to cleaning up the city, the Grand Cancun would also house a movie theater, malls, a convention center and hotel rooms.

The Grand Cancun is carbon neutral, drawing all of its energy from natural sources. Solar panels, wind turbines, geothermal energy collectors and turbines that generate energy from the waves. The Grand Cancun would be able to provide its own clean water through desalination and would even filter the surrounding water to ensure that the city's waters stay clean. The building is an ambitious concept, to say the least, but it's nice to see designers thinking of green solutions for one of the world's biggest tourist zones.
4.6
Score
Popularity
Activity
Freshness
Attend Future Festival

Spanish Skyscraper Hotels
The ME in Barcelona