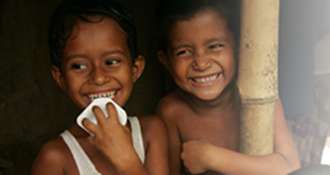 Tiana Reid — February 1, 2013 — Life-Stages
References: danone & fastcoexist
Launched in March of 2006, Grameen Danone Foods is an example of what's to come in the realm of social business. The venture is a collaboration between the Grameen Bank and the Danone food corporation and so Muhammad Yunus is often considered the face behind the project. The goal is to incorporate the local food needs of Bangladeshi children with job creation and environmental sustainability. A product named Shoktidoi was launched a few month's after the collaboration, in November of 2006, and is a yoghurt that is specialized toward nutritional deficiencies.