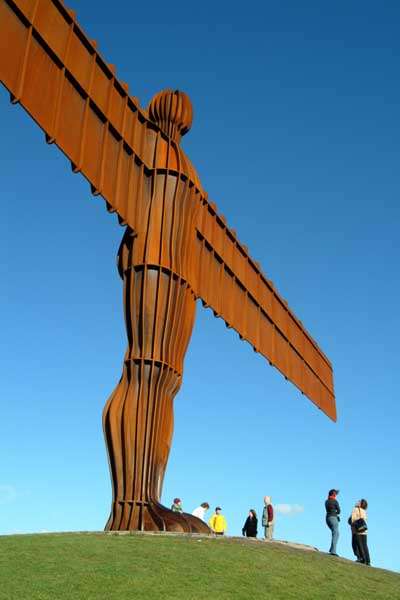 ‘Angel Of The North' To Become Street Artist Canvas

In a bid to make the Antony Gormley structure appear more “trendy” and cover up the “rust effect” to appeal to a wider audience, graffiti artists from around the UK were invited to use the sculpture as a canvas for their work.

The council said the graffiti must be the same theme as the original piece and help create “a sense of embrace.” To keep the organic feel of the sculpture, spray cans are the only method allowed, with safety harnesses being optional. There will also be “graffiti whores” on hand to attend to the artists’ every need.

The full artist list is yet to be confirmed but is thought to include Banksy, Faile, Pure Evil and D*Face. This merry gang was last seen showing together at the ‘Cannes’ Street Art Festival in May last year. Many will ask what they are bringing to the piece except for “crass language and migraine inducing colour-ways.”

It is testament to how seriously street artists are being taken now that Gateshead Council agreed to an extensive rider in order to secure the big names. This list includes graffiti whores, Malibu and coke, a spray can fluffer and a chocolate fountain and five large bottles of Jack Daniels for Pure Evil.

The Angel of the North overlooks the A1 road and the A167 road into Tyneside, and can also be seen from the East Coast Main Line rail route. Regular commuters are said to have welcomed the news, one saying “the local radio is s**t, anything that livens up my journey will be a blessed relief from their mundane discussions.”

Antony Gormley OBE, the English sculptor behind the piece, is said to be “f**d off” and quoted saying he does not want a “bunch of ‘aerosols’ messing with this iconic landmark.”