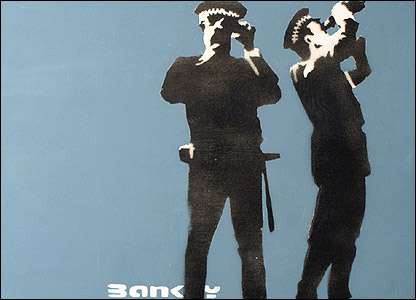 10 original pieces of Banksy put in auction at the Bonhams auction house were expected to raise a maximum of £300,000. However his works were so popular that they exceeded the estimates. All his works reportedly fetched up to £546,000.

"Avon and Somerset Constabulary", which depicted two policemen looking through binoculars got the most money at £96,000.

Also included in the auction is the "Di Faced Tenners". The screen print which consisted of a series of £10 notes where Queen Elizabeth's head had been replaced by that of Princess Diana sold for £24,000.

Banksy has some celebrity fans including Angelina Jolie and Brad Pitt who previously bought an original from him for $1 million.
4
Score
Popularity
Activity
Freshness
Attend Future Festival