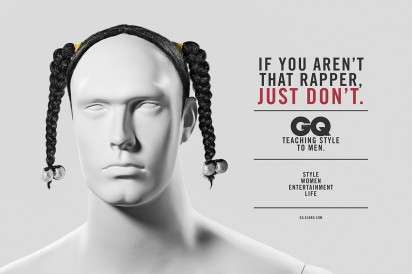 Meghan Young — May 15, 2013 — Marketing
References: lewlaratbwa.br & ibelieveinadv
Share on Facebook Share on Twitter Share on LinkedIn Share on Pinterest
It is only natural for people to mimic the way their role models look, but the GQ Teaching Men to Style ad campaign shows that what one person can get away may not be the same for another. In fact, when it comes to outrageous looks such as Hulk Hogan's handlebar moustache or MC Hammer's harem-inspired pants, it is strongly encouraged that no one copy them. For instance, one reads, "If you aren't that rapper, than don't."

The GQ Teaching Men to Style ad campaign was conceived and executed by LewLaraTBWA, an ad agency based in Brazil. By hilariously relying on iconic looks, the agency brings a fun nostalgic touch to the campaign. It was art directed by Ary Nogueira with creative direction by Cesar Herszkowicz.
2.8
Score
Popularity
Activity
Freshness
Attend Future Festival