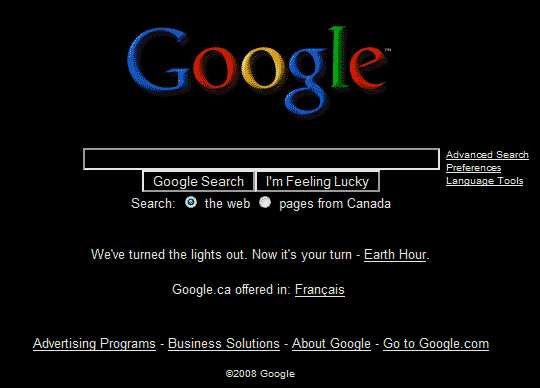 Jeremy Gutsche — March 29, 2008 — Eco
References: trendhunter
Share on Facebook Share on Twitter Share on LinkedIn Share on Pinterest
To mark Earth Hour, Google has changed its background to be all black. This is fascinating because it reminds us of Blackle. Last July, a site called 'Blackle' launched a black-background search engine noting that if Google went black, the site could save the world 750 Megawatt-hours per year. Well now Google is black - but only for a day.

The press release notes, "Google users in Canada will notice today that we "turned the lights out" on the Google.ca homepage as a gesture to raise awareness of a worldwide energy conservation effort called Earth Hour. As to why we don't do this permanently - it saves no energy; modern displays use the same amount of power regardless of what they display. However, you can do something to reduce the energy consumption of your home PC by joining the Climate Savers Computing Initiative."
2.7
Score
Popularity
Activity
Freshness
View Innovation Webinars