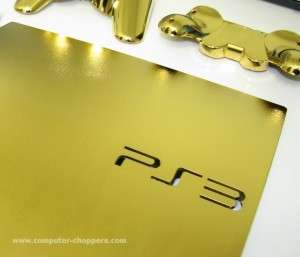 If a golden PS3 Slim console isn’t in your budget, Computer Choppers' 24K gold-plated smartphone offering, the 24K Blackberry Tour 9630, is available in gold, platinum, chrome, or copper for $899.

In 2007, Computer Choppers, a company that provides luxury customizations of computers and electronics, was in the news when they customized a MacBook Air Laptop with 24K gold plating and a diamond-studded Apple logo.
4.8
Score
Popularity
Activity
Freshness
Get Better and Faster

Custom-Colored Consoles
The Colorware Rainbow Reinvention of the PS3 Slim