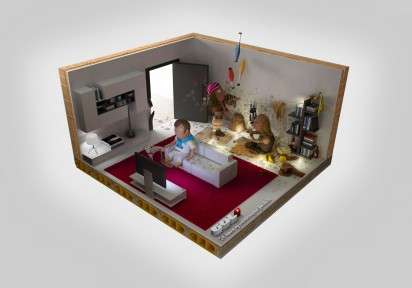 Meghan Young — April 6, 2012 — Marketing
References: tapsa.es & ibelieveinadv
Share on Facebook Share on Twitter Share on LinkedIn Share on Pinterest
The Gol Television Football Channel ad campaign shows that with 24 hour football on the network all day every day, men will be so distracted that they won't even care where they are or what is happening around them. Even if they happen to be in a jail cell or their loved one just died or, hilariously, their home has been invaded by squatters.

Created by Tapsa, an ad agency based in Madrid, Spain, the Gol Television Football Channel ad campaign depicts these particular scenarios via illustrations by Tito Baztan. Art directed by Raul Barbolla and Miguel A. Molina with creative direction by Adrian Rios, the ads are, at the end of the day, fun to take in.
3.7
Score
Popularity
Activity
Freshness
Attend Future Festival