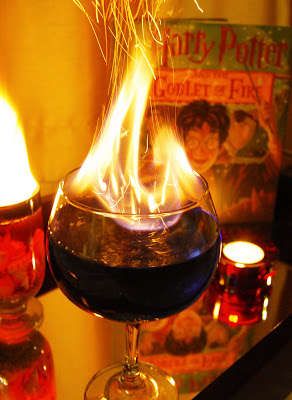 Meghan Young — April 24, 2013 — Lifestyle
References: sashahalima & neatorama
Share on Facebook Share on Twitter Share on LinkedIn Share on Pinterest
The 'Harry Potter' franchise is still going strong and two women have just concocted inspired Goblet of Fire cocktails for those old enough to enjoy them while re-watching either the entire collection of movies or perhaps just the one they were named after. Created by Ashley Brice and Liana Cole, the series is comprised of four drinks, three of which are inspired by characters from J.K. Rowlings' world.

For instance, one of the Goblet of Fire cocktails pays tribute to Fleur Delacour with Nuvo, vodka, raspberries and a strawberry while Viktor Krum's homage is much more direct, coming in the form of beer and brandy. Of course, the Goblet of Fire drink is the most impressive. Made with vodka, curacao lemonade, Splash 151 and cinamon, it's presented set on fire.
1.4
Score
Popularity
Activity
Freshness
Access Advisory Services