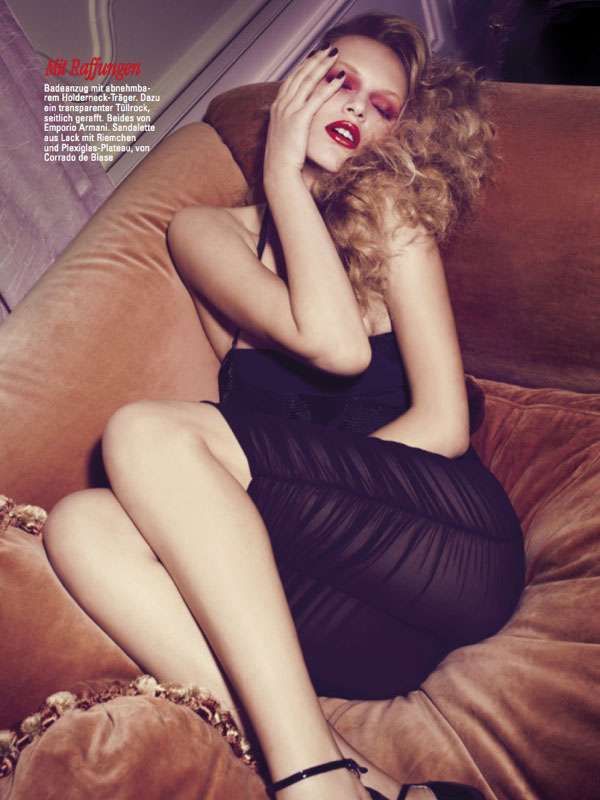 Jordan Sowunmi — July 20, 2011 — Marketing
References: glamour.de & fashiongonerogue
Share on Facebook Share on Twitter Share on LinkedIn Share on Pinterest
Since her career began in early 2008, Valeria Dmitrienko has been viewed as a stunning new face whose thick eyebrows and steely focus gave her the strong potential for a crossover into high-fashion editorials, and if her shoot for Glamour Germany August 2011 is any indication, that crossover may be finally actualized.

For her Glamour Germany August 2011 editorial, Dmitrienko was shot by accomplished photographer David Roemer, considered by industry experts to be a large part of as the new generation of shutterbugs that will help guide fashion photography in this millennium. His work has appeared in the New York Times Magazine, New York Magazine, BlackBook, and Spin, amongst other major publications.

In the Glamour Germany August 2011 shoot, both Dmitrienko and Roemer are on the top of their game as she models lingerie from major companies like Yves Saint Laurent, Calvin Klein and Zac Posen. Each shot shows Dmitrienko's ability to dominate a photograph with the powers of her expressive face. She alternates between alluring, seductive and playful with an ease that belies the fact that she's only been in the game for three years.

The poise, grace and sex appeal Dmitrienko displays in this Glamour Germany August 2011 editorial will likely be the shoot that propels her to the next level of high-fashion modelling.

Implications - One of the most effective ways a company can draw attention for its brand is by investing in advertising that is largely sexually charged. By eschewing the conventions of traditional marketing and appealing to a consumer's carnal interests, the company shows a willingness to toe the line between racy and raunchy. This attracts attention from consumers, critics of the ad's sexual content, and a controversy hungry media looking for a divisive issue. All three are important in establishing brand awareness.
4
Score
Popularity
Activity
Freshness
View Innovation Webinars