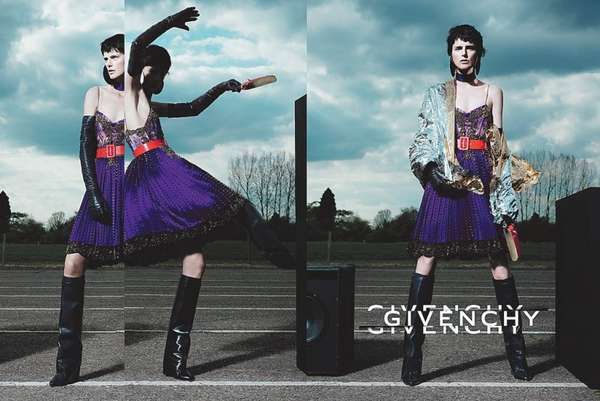 Meghan Young — June 22, 2012 — Fashion
References: givenchy & fashiongonerogue
Share on Facebook Share on Twitter Share on LinkedIn Share on Pinterest
The Givenchy Fall 2012 campaign may be edgily fractured in a number of places, but that doesn't mean the outfit featured in the photoshoot cannot be appreciated in its fullest. In fact, the fractures impose multiple images positioned into one, giving its audience multiple views of the same ensemble. In this case, model Stella Tennant is clad in dress fitting for a punk princess.

Captured by photography duo Mert Alas and Marcus Piggott, the Givenchy Fall 2012 campaign will also star Joan Smalls, Stef van der Laan, Daniela Braga, Simone Nobili, Jarrod Scott and Rodrigo Braga, although those images have not yet been released. Each and every one of them were styled by the talented Carine Roitfeld.
4.6
Score
Popularity
Activity
Freshness
Jeremy Gutsche Keynote Speaker