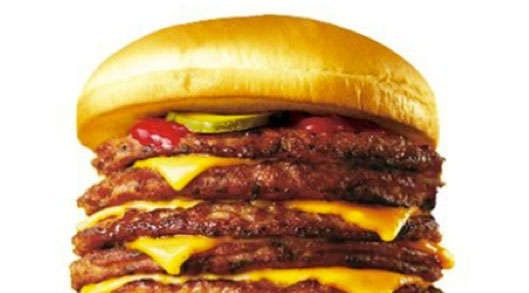 Well, this nine-patty giant burger comes from Lotteria, a Japanese hamburger chain that is releasing this giant burger in order to promote the Evangelion: 3.0 You Can (Not) Redo's Blu-ray and DVD launch. That's right, this giant tower of beef and cheese is all to promote the release of a new anime movie. If you purchase the giant burger for 1,280 yen ($12.86 USD), you'll also be given a Spear of Longinus replica from the anime series as well.

According to Kotaku.com, the giant burger is "called the Q-Story Cheese Burger, because, in part, the movie's Japanese title is Evangelion Shin Gekijouban: Q. It's also wordplay: The burger has nine patties, and the Japanese word for nine is 'kyuu.'"
3.9
Score
Popularity
Activity
Freshness
Get Trend Hunter Dashboard