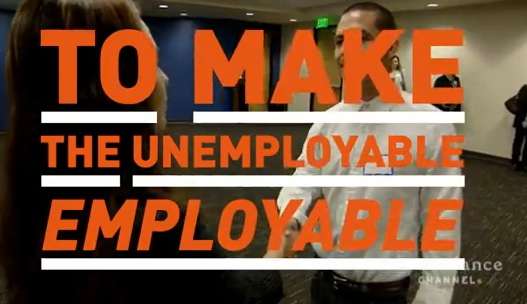 Get to Work is Unscripted and Depicts the American Jobless

Rebecca Byers — August 14, 2012 — Social Good
References: youtu.be & fastcocreate
Get to Work is a new unscripted series premiering this week on the Sundance Channel in the US for which a trailer was recently released. The trailer depicts the tense scenes of the intensive workshops which aim to teach interpersonal skills and other marketable skills like the Second Chance program and STRIVE.

The series follows several workshops that endeavor to prepare a group of “unemployable” people facing joblessness for a variety of reasons such as addiction, homelessness or welfare dependency. The training at the workshops documented on Get to Work include things like getting to work on time, while also providing support so they don’t quit and stay sober when a job becomes frustrating.

The non-fiction series is sure to spark a well-needed discussion on the American unemployment crisis and will shed light on an area of the modern economy that can benefit from such difficult yet essential programs.