19 Automotive Works of Art
Next
Set of
Related
Ideas 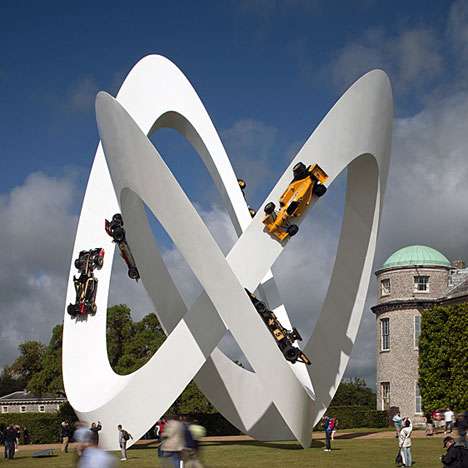 The Gerry Judah Lotus Sculpture is a Wild Ride

Romina S. Cortellucci — July 6, 2012 — Autos
References: judah & dezeen
Share on Facebook Share on Twitter Share on LinkedIn Share on Pinterest
For the past 16 years, designer Gerry Judah creates a centrepiece sculpture for Goodwood Festival of Speed in West Sussex. This year, the Gerry Judah Lotus Sculpture is greater than his previous work. The sponsor of this particular sculpture was the British car brand Lotus, who provided six historic Lotus Formula 1 cars to be attached to the knotted racetrack. The spectacular design is over 60-tonnes and is hollow, running across 150 metres of roads. Driving it would make for one wild ride.

Built with a lack of an internal frame, the, "construction technique was used in tribute to Lotus founder and designer Colin Chapman (1928-1982) who introduced the monocoque chassis to automobile racing, enabling the chassis and body of a car to be made in one piece," according to Dezeen.