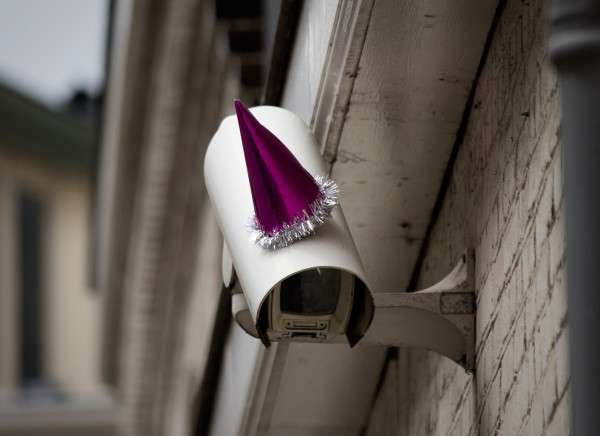 George Orwell’s Birthday Party by FRONT404 is a Big Bash

Meghan Young — June 28, 2013 — Art & Design
References: front404 & visualnews
Share on Facebook Share on Twitter Share on LinkedIn Share on Pinterest
Prolific author Eric Arthur Blair, better known by his pen name of George Orwell, would have turned 110 years old this past June 25 and to celebrate FRONT404 put together George Orwell’s Birthday Party. They invited the entire city of Utrecht, the Netherlands, to participate, although most of them did unknowingly. The only decoration put up were classic birthday hats on often unnoticed surveillance cameras.

This, of course, was done purely on purpose. The George Orwell’s Birthday Party series pays tribute to his famous book ’1984,' in which a totalitarian government monitored all of the population in a Big Brother surveillance state. The artists state, "By making these inconspicuous cameras that we ignore in our daily lives catch the eye again we also create awareness of how many cameras really watch us nowadays, and that the surveillance state described by Orwell is getting closer and closer to reality."
0.5
Score
Popularity
Activity
Freshness
View Innovation Webinars