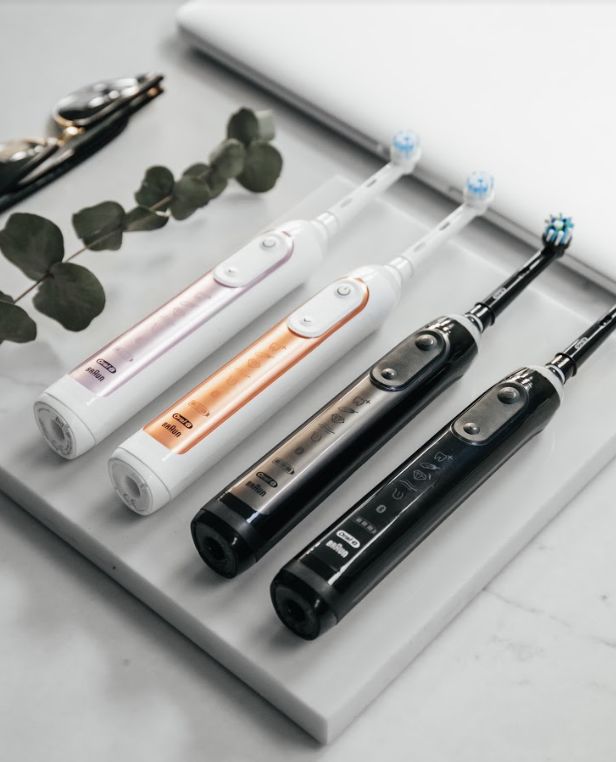 Riley von Niessen — October 10, 2019 — Lifestyle
References: oralb
Share on Facebook Share on Twitter Share on LinkedIn Share on Pinterest
Oral-B recently launched the Genius X, an electric toothbrush that’s able to provide helpful data to users through a connected AI app. With the brush capable of providing personalized feedback both during and after every brush, it shows users just how long they should be brushing, which areas they aren’t paying enough attention to, and the right amount of pressure to use. To find out more about the Genius X and how it works, we spoke to Irene Iancu, a registered dental hygienist, clinical educator, and Oral-B spokesperson.

What prompted Oral-B to design that Genius X?

I think it's time for a revolution in tooth brushing. We've been accustomed to brushing our teeth a certain way. As a dental hygienist, I'm always looking for new ways for my patients to brush better and more efficiently. So I think that's what prompted Oral-B: the need to take the next step in a great product and make it even better.

How does the toothbrush use AI and machine learning to be more effective in brushing?

The team behind the Genius X has taken lab testing results from over 1,000 patients, and taken into account how we all brush differently. We all hold the toothbrush in a different direction, some facing the sky, some facing down to the ground. It's taken all of these different tooth brushing techniques and implemented it into the AI. So, the toothbrush knows where you're brushing, and it's able to estimate if you're brushing that same tooth or the same area for the right amount of time. It's using a gyrometer and an accelerometer, and it's using time and space as a decider of whether you're brushing your teeth the right way or not.

How is feedback from the brush shared to the connected app?

Through Bluetooth connectivity, which makes it easy for consumers to keep track of their habits as the app doesn't actually need to be on as their brushing. We store up to 23 different brushing times, so if you're moving around your house, you can sync your toothbrush after the fact. Due to this, WiFi isn't needed while brushing either.

If a family were to buy one Genius X to share by using different toothbrush heads, would it be able to track all of their data?

Absolutely. It would just need to sync to a different device. So if you had a family of four, each person would need a device of their own to be able to connect. Swapping out the heads is easy, and each one features a color coded ring that can be attached so that they don't get mixed up.

What insights can consumers gain from using the Genius X regularly, and why is this important for them?

Mainly, it's the data the brush collects regarding the areas that you've missed.

I found it interesting just experimenting with my own brush when it came to this. I brushed my teeth yesterday with the app open and I brushed for 3 minutes and 32 seconds. This morning I purposely didn't turn the app on. I was curious if I brushed my teeth for the right amount of time, and as a dental hygienist you would assume that I am the queen of toothbrushing. When I checked the app though I saw that I only brushed my teeth for 1 minute and 13 seconds.

I found it really interesting that even as a dental professional who thought I was doing fine, I actually wasn't brushing as effectively as I could have been. What’s great about the Genius X is that it allows you to look at the specific areas that you're missing. Most people, ironically, missed the backs of their mouths, where the biggest teeth are. I think it'll give you some insights to build good habits for a long life of brushing.

Are there any other common misconceptions regarding oral care that the Genius X can help to address?

Definitely. For example, there's a pressure sensor that's built into the handle itself, so if you're pressing too hard, that can affect the gums and potentially cause gingival recession, which can be a big problem as gums can't grow back on their own once they've been pushed back. There are surgical interventions that people go through but they're not pleasant and can be quite expensive.

With the pressure sensor, the Genius X helps to reduce the amount of force by changing the color that's shown on the handle to a bright red. Through this, the oscillation also stops as well. The Oral-B toothbrushes have three different types of movements, a rotation, oscillation, and a pulsation. It slows down the head itself, so that you're not damaging the tissue if you brush too hard.
7.9
Score
Popularity
Activity
Freshness
View Innovation Webinars