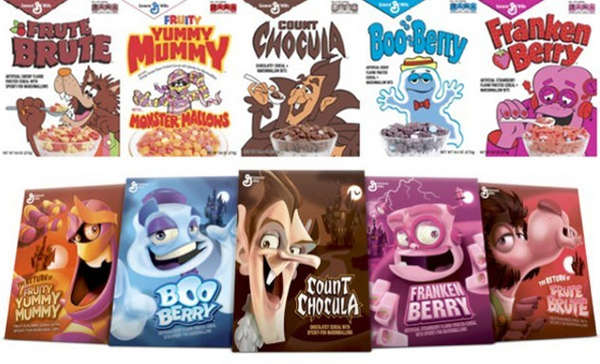 Michael Hemsworth — August 24, 2013 — Marketing
References: blog.generalmills & geekologie
Share on Facebook Share on Twitter Share on LinkedIn Share on Pinterest
With fall just around the corner, General Mills is taking the season in stride by re-releasing some of their most ghoulish sugary cereals. Including Frute Brute, Fruity Yummy Mummy, Count Chocula, Boo-Berry and Franken Berry in the mix, the announcement from General Mills has caused quite a stir amongst fans of the classic cereal flavors.

As the names suggest, each of the General Mills products receiving a complete rebranding and re-release are all themed in a rather spooky manner, which makes the campaign perfect for the Halloween season. While certain flavors like Count Chocula and Franken Berry have been available here or there over the years, the other General Mills products have been discontinued for some time, which makes the release something of a treat for adults that remember the cereals from their childhood.
3.1
Score
Popularity
Activity
Freshness
Jeremy Gutsche Keynote Speaker