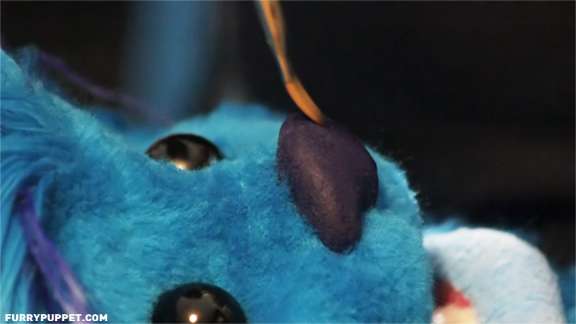 Jordan Sowunmi — May 8, 2011 — Pop Culture
References: furrypuppet & furrypuppet
Furry Puppet Studio is a Brooklyn-based company that specializes in creating cute and cuddly custom puppets. The small company run by Zack Buchman and Maria Gurevich has already established an international reach as their custom puppets have crossed the order with commercials airing in Europe as well as the US.

Their latest creation appears in a music video for French folk duo Herman Dune. The vid features Mad Men's Jon Hamm, who picks up a hitchhiking furry blue yeti and embarks on a road trip with the crawling critter. The two drive through a backwoods country road, stopping at a rest area where the yeti befriends a young child with a lollipop. The two share a tender moment before Hamm and the yeti continue their pilgrimage to the city, where they strengthen their bond over a Herman Dune concert. The video is equal parts as funny as it is musical, showing once again that Furry Puppet Studio has the magic touch.
0.6
Score
Popularity
Activity
Freshness