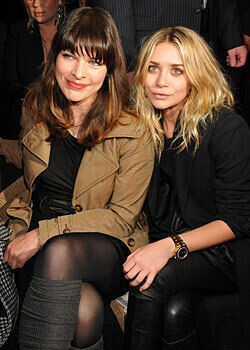 New York has played host to star-studded events this last week, drawing celebrities to front rows of shows and to glamorous after parties.

The stars get to take in the spectacles, bathe in the limelight, revel in the publicity and of course pick up thousands of dollars worth of designer swag. Although celebrities have a public expectation to dress in cutting edge fashions, most are lucky enough to leave the picking to the impeccable tastes of their stylists.

Here's a list of some of the celebs spotted this week:

At Jill Stuart - Hillary Swank looked a little Bewitched at the show, other stars spotted there were Amy Smart and Rachel Smith (Miss America 2007)

All photos of the aforementioned celebs at Fashion Week plus way more can be seen at Sky Showbiz.