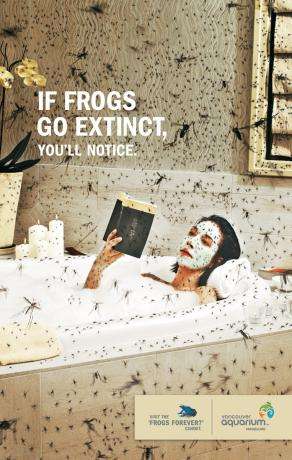 Ayman — May 4, 2008 — Eco
References: vanaqua.org & adsoftheworld
Share on Facebook Share on Twitter Share on LinkedIn Share on Pinterest
Want to have a glimpse of what our world would be like if frogs were to become extinct? Well, judging by the new ad campaign from Vancouver Aquarium, you will have an outbreak of bugs and insects everywhere, and that includes inside your kitchen, bathroom and your living room.

According to the Vancouver Aquarium, "The world is facing what may be the single largest mass extinction event since the time of the dinosaurs: as many as half of the world's 6,000 known amphibian species could be wiped out in our lifetimes."

The campaign is a promotion of the 'Frogs Forever?' new exhibit at the Aquarium. The exhibit "trains the spotlight on the plight of the world's frogs, with tips on how we can all help save them. The new gallery features 26 species of amphibians and interactive activities that engage, amaze and inspire visitors to care for these important creatures of our natural world."

To learn more about the global amphibian crisis read this article from the spring 2008 issue of the Aquarium's Waters magazine. Watch an amazing Bullfrog Ballet video by Vancouver Aquarium here.

As someone who has insect-phobia, I have to say: lets save the frogs, please!!!
4
Score
Popularity
Activity
Freshness
Access Advisory Services