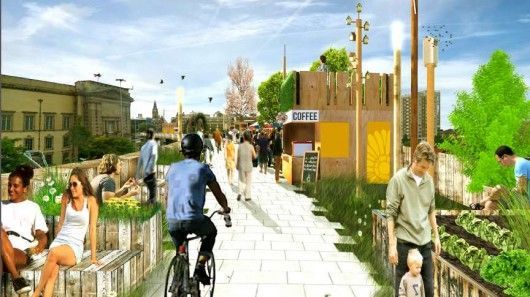 The Friends of the Flyover Project is Audacious

Rahul Kalvapalle — July 10, 2014 — Eco
References: friendsoftheflyover.org.uk & gizmag
Share on Facebook Share on Twitter Share on LinkedIn Share on Pinterest
Friends of the Flyover is an architectural project, based in the city of Liverpool in England, which aims to transform a flyover into an urban community park and alternative events space. The flyover was set to be demolished, but the project hopes to salvage it and appropriate it for a different use.

It is hoped that the Friends of the Flyover project will enable people in both central and northern Liverpool to engage with an area of the city that is largely forgotten.

The proposed designs for the flyovers include things like bicycle and pedestrian paths, cafes, raised plant beds, independent retail kiosks and shopping stalls. The flyover will offer WiFi access, while its space can be used for things like farmers' markets, concerts and artistic performances.