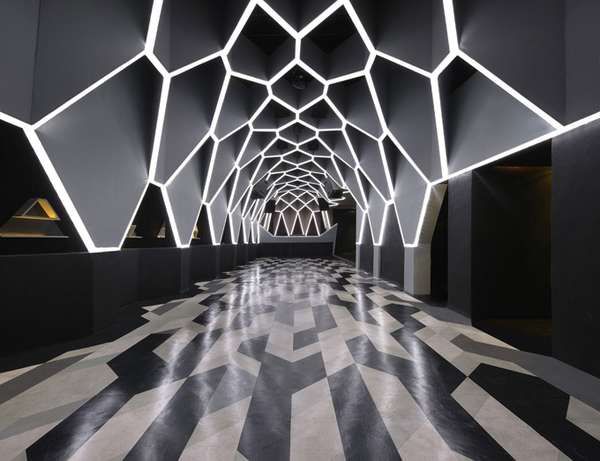 Corinne Guirgis — August 22, 2011 — World
References: framemag & zeutch
Share on Facebook Share on Twitter Share on LinkedIn Share on Pinterest
Hang out and dance the night away at the Fred Mafra Josephine Roxy Nightclub in the booming Belo Horizonte, Brazil. The club's design is centered on extreme geometric angles like hexagons and prisms that repeat themselves throughout to create that honeycomb aesthetic. Complete with two dance floors, three bars, four VIP areas and a smoking patio with a retractable roof, the state-of-the-art club is massive and as good as it gets for Brazilian nightlife.

The club's trippy design can be attributed to the brightly flashing LED lights, which line the asymmetrical shapes and create a perceptive shift for clubgoers every time they move their bodies. The space, which comes in at a whopping 955 square meters, also has a high-tech exterior, whose facade is made up of 20 LCD panels. Though the club made its debut in 2007, Mafra recently redesigned its entire concept. "Reforming your own project brings you a special freedom that comes from already mastering the space you are working with, plus from the confidence of being the owner in your work," Mafra says.
3.5
Score
Popularity
Activity
Freshness
Attend Future Festival

Geometrically Futuristic Lounges
The Allure by Capriani is Upscale, Sleek and Sophisticated