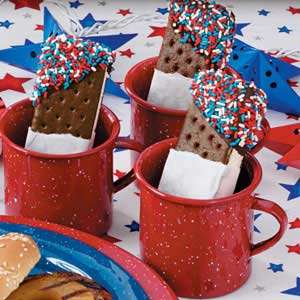 — June 26, 2013 — Special
References: simplyhomeandfamily.blogspot
Share on Facebook Share on Twitter Share on LinkedIn Share on Pinterest
With the Fourth of July arriving in just one short week, patriotic party-goers are in need of a tasty dessert to nibble on while lounging by the pool or watching some sizzling fireworks; that's where Simply Home and Family's Fourth of July Ice Cream Sandwiches come in. This recipe could not be simpler, and yet looks effortlessly festive and fun. The baker simply melts some semi-sweet chocolate, then dips the ends of several ready-made ice cream sandwiches into the melted chocolate, then into a bowl of red, white and blue sprinkles. The ice cream sandwiches can be stored in a freezer until they're ready to be served, making them one of the easiest and tastiest desserts on the scene this long weekend.

The Simply Home and Family website shows the Fourth of July Ice Cream Sandwiches served in red, metal mugs, which adds an additional patriotic touch. Regardless of how these desserts are served, their festive flair and refreshing taste is sure to get mouths watering this holiday season.
3.4
Score
Popularity
Activity
Freshness
Attend Future Festival