Forget about donating body for research. How about for display? 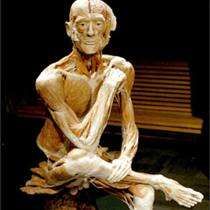 The 30-year-old Toronto woman is the first Canadian to volunteer her body to Dr. Gunther von Hagens for his Body Worlds exhibits, where human bodies undergo a process called plastination, are stripped of their skin, and are put on display in museums to showcase every feature of human anatomy.

Chapu says she had long researched what to do with her body when she died and plastination was the concept that appealed to her most.

"Nowhere else can we see what we look like on the inside and it's done in such a respectful manner to the donors," she says.

"It's amazing how we're made and how we function. It's so beautifully done and everything works together. It gives you a whole new respect for your body and what we are."

Plastination involves replacing the body's natural fluids with reactive plastics. It leaves muscles, organs and everything else with a shiny, plastic look.

Rather than being grisly, the human mannequins actually look fake, and you need to remind yourself that you're looking at a real body which was once a real person, Chapu says.

The eye-opening exhibit is currently running at the Ontario Science Centre in Toronto and has been showcased around the world in cities such as London, Berlin, Seoul, Singapore, Los Angeles and Chicago.

The controversial exhibit uses the plastinated parts of more than 200 bodies to show the workings of the body's various systems, as well as the damaging effects of disease and cigarettes and alcohol.

More than 20 complete bodies are also on display, twisted and contorted into different positions to show how the body reacts and works in everyday life.
3.4
Score
Popularity
Activity
Freshness
Get the 2021 Trend Report FREE