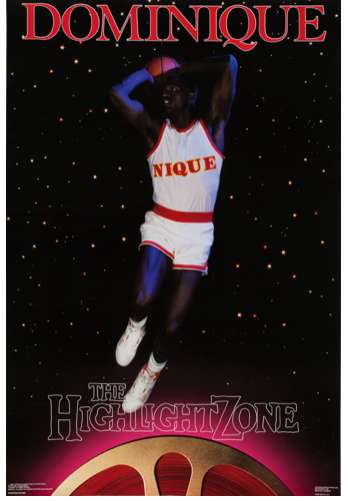 The For the Kids Exhibit Contains Superstar Sportsmen

Jordan Sowunmi — June 25, 2011 — Lifestyle
References: salon94 & bkrw
Share on Facebook Share on Twitter Share on LinkedIn Share on Pinterest
John and Tock Costacos are brothers and former sports t-shirt manufacturers who gained recognition for a 'fantasy' sports posters that set athletes as superheroes, now their work is being celebrated and displayed in the For the Kids exhibit in New York City.

The Costacos brothers got the idea for the poster series as the worlds of athletics and entertainment began to merge in the mid-90's. “We wanted to make the athletes into comic book heroes," said John about the For the Kids Exhibit. "They’re larger than life. They’re Superman. They’re Batman. They’re Hollywood action stars that kick the shit out of 20 bad guys always living to fight another day."

The collection contains shots of iconic athletes, usually equipped with an accessory or outfit that matches their nickname. Some of my favorites include: "The Mailman" Karl Malone, "The Guardian" Patrick Ewing, and Lawrence "The Terminator" Taylor.

The For the Kids exhibit is being displayed at the Salon 94 Freeman art gallery in New York City from June 23rd-July 30th, 2011.

Implications - For a company seeking immediate strong and engaged consumer base for their product, nothing can be more valuable than a partnership with a professional athlete or league. Regardless of the player's star status or visibility, a connection to an athlete immediately attracts the interest of fans of the team and establishes a connection between the brand and the team. Sports fans are passionate and have long memories. A connection between a brand and athlete will embed the company's brand in the mind of consumers for much longer than the ad campaign runs.
4.3
Score
Popularity
Activity
Freshness
Get Trend Hunter Dashboard