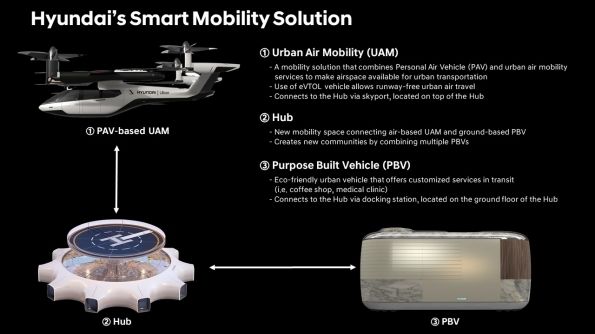 Daniel Johnson — January 8, 2020 — Autos
References: hyundainews & engadget
Share on Facebook Share on Twitter Share on LinkedIn Share on Pinterest
Hyundai and Uber collaborated to produce a flying taxi concept vehicle, which is titled the S-A1. The flying taxi concept brings Uber closer to its goal of launching Uber Air in 2023, which will be an air taxi service. The S-A1 is entirely electrically powered and it is capable of vertical take-off and landing. Additionally, the S-A1 is able to hold four passengers and has a range of 60 miles, as well as a top speed of 180 MPH.

Hyundai believes flying taxies could be used in conjunction with self-driving vehicles, where various 'Hub' locations could be used to connect flying taxis to self-driving cars. The two companies will continue to work together, where Uber will handle the aerospace side of the partnership, while Hyundai will focus on ground transportation.