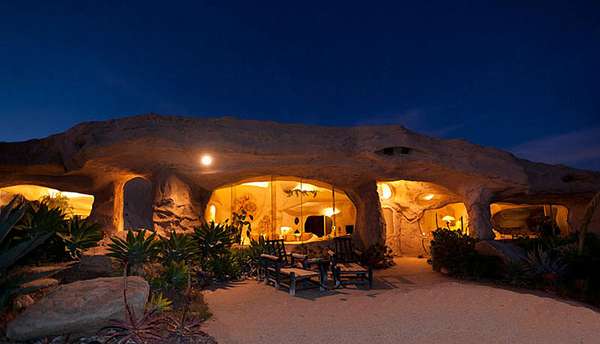 Dick Clark's Flintstones-Inspired House in Malibu is ip for Sale

Rebecca Byers — March 27, 2012 — Art & Design
References: inthralld & designyoutrust
This Flintstones-inspired house is a one bedroom, two bathroom home based on the humble abode from the 1960s-era cartoon is nestled on a sprawling 23-acre lot in Malibu, California. Currently owned by television legend Dick Clark and his wife, the massive cartoon-inspired property with incredible ocean and mountain views is now on sale for a mere $3.5 million.

The southern California Flintstones-inspired house looks just like the rocky home of Fred and Wilma, with the interior fashioned from similar beige, round rock made to look rugged. The ultra-neat house has similarly rugged looking windows that have a view of both the mountains and the water. The home is also surrounded by cactus and greenery, giving it an all-around unmatched natural beauty aesthetic.