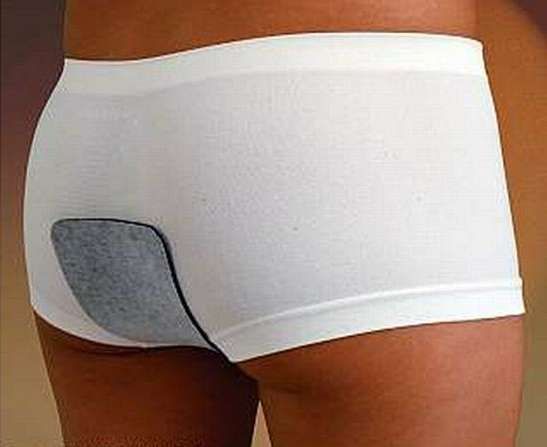 Meghan Young — June 29, 2012 — Art & Design
References: colonialmedical & dvice
Share on Facebook Share on Twitter Share on LinkedIn Share on Pinterest
There are a number of scenarios in which the Flat-D Flatulence Deodorizer would come in handy. Imagine a first date and a bad meal. The stomach rumbles could lead to a relationship apocalypse before it even began. Now imagine a peaceful sleep interrupted by a toxic odor that threatens to harm everything that resides under the sheets. The Flat-D Flatulence Deodorizer helps people avoid these tragic scenarios in a discreet manner.

Essentially, the Flat-D Flatulence Deodorizer is a pad quite similar to female sanitary napkins. Instead of lining the inside of an undergarment, however, it is placed on the outside. Working best with tighty whities, or similar underwear, it effectively absorbs the smell of farts. Once used, it can be thrown out. Paired with the 4Skins underwear, and no one will have to suffer ever again.
6.7
Score
Popularity
Activity
Freshness
Get Trend Hunter Dashboard

Stench Quenchers
The Fart Extinguisher is a Life-Saving Air Freshener