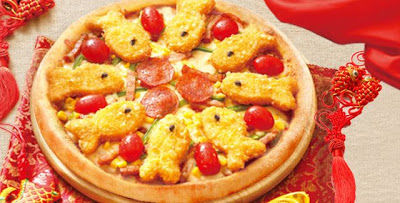 Katherine Pendrill — February 9, 2016 — Lifestyle
References: dominos.cn & brandeating
Share on Facebook Share on Twitter Share on LinkedIn Share on Pinterest
To celebrate Chinese New Year, Domino's China developed a new menu item called the Fish Deluxe pizza. Not only does the new dish appeal to Chinese taste preferences, but it also represents a nod to some of the traditions surrounding Chinese New Year.

The new Fish Deluxe Pizza is a festive dish decorated with breaded fish sticks around the edges. The golden-fried fish sticks come in the shape of fish, which are considered lucky in Chinese culture because their scales are said to ressemble money. The rest of the pizza is topped with a mix of corn, green peppers, French lardons, cherry tomatoes and pepperoni.