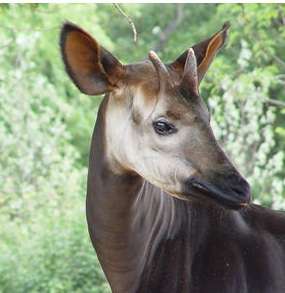 Okapi, according to the ZSL site, are very shy.  The ZSL partnered up with the Congolese Institute for Nature Conservation (ICCN) in the Democratic Republic of the Congo (DRC), and set up camera traps in Virunga National Park’s Watalinga Forest to capture this rare and beautiful mammal.

The photos above were taken over a two-week time frame and they hope to obtain more of Africa’s Unicorn over the next several weeks.  What’s even more exciting is that the photos “...revealed the presence of a previously unknown population on the east side of the River.” As almost everyone is aware, the African Congo is riddled with upheaval and violence so that idea that the Okapi still survives in this area has members of the ZSL and ICCN very excited.

Unfortunately, poaching continues in the Congo and apparently they (poachers) have had more luck in finding Africa’s Unicorn than people who are looking out for them—Okapi meat is sold in the city of Beni.  The ZSL and ICCN are concerned that if poaching continues, the Okapi will become extinct in Virunga National Park, one of only three areas known where Okapi live.

Although the Okapi looks more like it would be related to the Zebra due to its zebra-like stripes, or Gazelle due to its facial features, it is actually the closest cousin to the Giraffe.