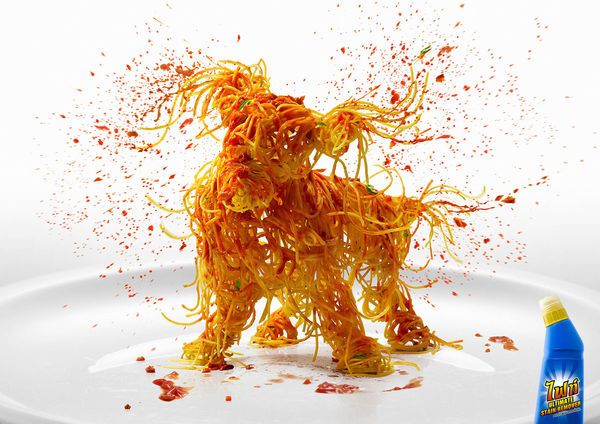 Meghan Young — April 29, 2014 — Marketing
References: adeevee
Share on Facebook Share on Twitter Share on LinkedIn Share on Pinterest
Stains can come from just about anything, messy meals such as spaghetti, messier pets including dirty dogs or a combination of the two as depicted in the Fight Ultimate Stain Remover ad campaign. Although there are no such things as spaghetti dogs, even in myths and legends, sometimes a person can feel ganged up on by two or more sloppy occurrences to make it feel like such creatures exist.

Conceived and executed by BBDO Proximity, an ad agency based in Bangkok, Thailand, the Fight Ultimate Stain Remover ad campaign embraces this feeling to show just how effective a tool this product really is. It was art directed by Nares Limapornvanich with creative direction by Suthisak Sucharittanonta and Vasan Wangpaitoon.
5.4
Score
Popularity
Activity
Freshness
View Innovation Webinars