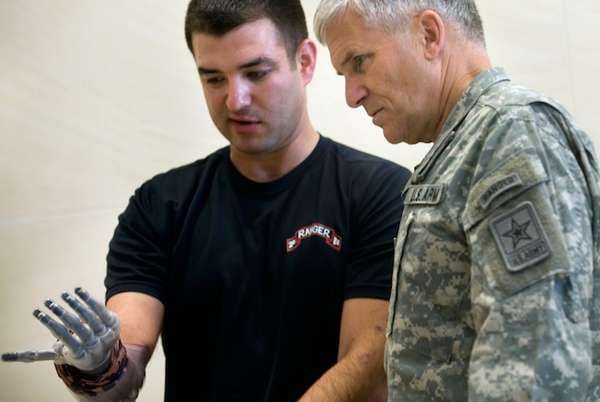 The Pentagon's Fiber Optic Arm is Being Fitted to Amputated Veterans

Omar Yusuf — November 6, 2011 — Tech
References: gizmodo
Share on Facebook Share on Twitter Share on LinkedIn Share on Pinterest
When an American soldier is wounded in the process of serving his country, the Pentagon and armed services have a tendency of throwing their full weight behind his recovery, and the Fiber Optic Arm hopes to give the most maimed and impaired veterans a chance at recovery.

According to a military-funded team of researchers at the Southern Methodist University, the best chance of giving prosthetics a degree of verisimilitude is with laser beams. A bundle of laser-filled fibers will be the intermediary between the next generation of prosthetic hands and the severed limbs they've been attached to. The Fiber Optic Arm can successfully translate the minute nerve impulses the body produces to tell limbs when and how to move, and will deliver those messages to a robotic hand. With tests being conducted as we speak, the next stage will be to send those neural messages back to the brain, so that the arm will be able to detect heat, pain and pressure.

Here's hoping the soldiers who served without question will have the pleasure of fully functional limbs as soon as possible.
1.3
Score
Popularity
Activity
Freshness
Get the 2021 Trend Report FREE