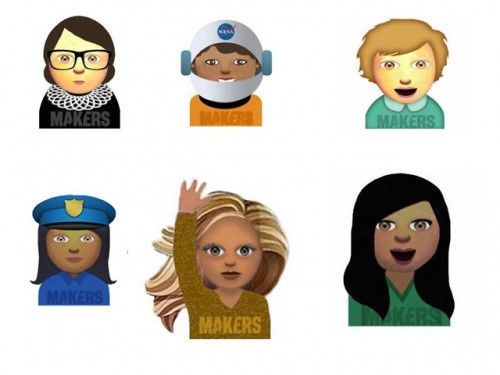 Katherine Pendrill — May 23, 2015 — Pop Culture
References: makers & hellogiggles
Share on Facebook Share on Twitter Share on LinkedIn Share on Pinterest
The emoji alphabet recently received a much-needed update, but an eager team of artists have designed their own update of sorts with a series of feminist emojis. Called "femojis" for short, these mini icons were designed by the women's blog 'MAKERS' to honor contemporary and historical feminist icons.

The designers of the femojis explain that while the emoji alphabet features a number of male emojis engaged in various activities, there are very few female counterparts. While this may seem insignificant, the designers explain that emojis are a valuable means of expression for many young girls and the currently lack of gender diversity is problematic.

In an effort to feature a larger representation of women in the emoji alphabet, the designers created tiny versions of 10 feminist heroes including Ruth Bader Ginsburg, Gloria Steinem and Oprah Winfrey.

While these powerful feminist emojis are unfortunately just prototypes, here's hoping that the next emoji update will feature some of these inspiring women.
2.2
Score
Popularity
Activity
Freshness
Jeremy Gutsche Keynote Speaker