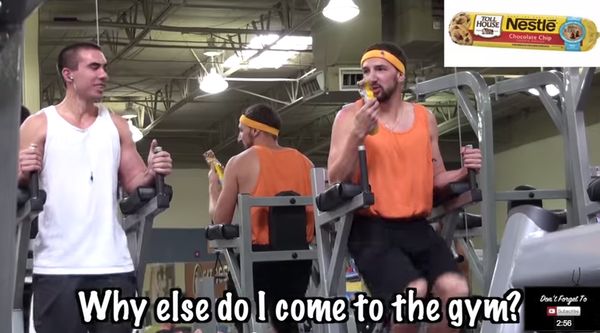 This Man Eats Junk Food During His Workout at the Gym

Jennifer Paul — April 17, 2014 — Pop Culture
References: youtube & youtube
This man has taken his workout regime to a whole new level with this fast food workout video. He goes to the gym to do his regular routine, but the big catch is that he eats pretty much all the junk food that he wants throughout his entire time workout out.

He eats a brownie and milk while on the treadmill, cookie dough, Twinkies, mini donuts and has an entire cake in his hand while lifting weights. He also eats chocolate syrup while doing steps. To top it off, he eats a 12-inch chili cheese hot dog while on the bike. Everyone around him is shocked, but he offers to share his food with people. I think we would all be traumatized if we saw someone devouring this much food while working out, but as you can see in the video, this fast food workout isn't going to go straight to his hips.
5.4
Score
Popularity
Activity
Freshness