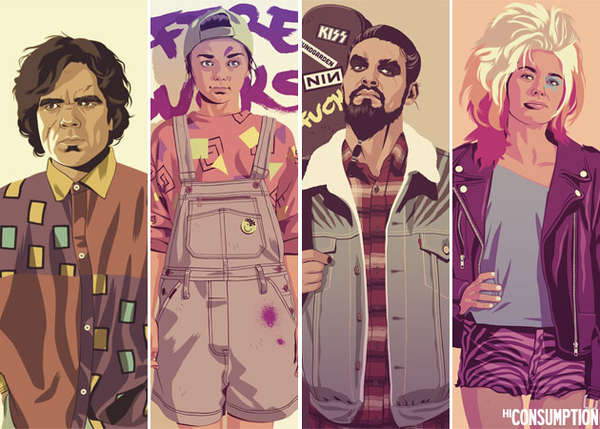 — July 3, 2013 — Art & Design
References: society6 & hiconsumption
Share on Facebook Share on Twitter Share on LinkedIn Share on Pinterest
Mike Wrobel's fantasy character drawings have tackled everything from 'The Girl with the Dragon Tattoo' to 'Breaking Bad.' His Game of Thrones illustrations, however, have truly caught the attention of the show's fans from all over the world. Instead of merely creating hyper-realistic portraits or sketches of each character, Wrobel adds a little twist; he re-imagines each Game of Thrones character as a grungy figure from the 1980s and 90s.

While Wrobel has released a previous collection of 80s-era Game of Thrones characters, his latest series is equally as fierce and fabulous, featuring everyone from Khal Drogo to Margaery Tyrell. A particularly memorable drawing in this series features Queen Cersei Lannister as a punk rocker, channeling a Courtney Love vibe that gives her a no-nonsense, rock n' roll attitude. Another visually arresting print depicts the adorably feisty Arya Stark as an adolescent from the 1990s, complete with baggy overalls and a backwards baseball cap.

Mike Wrobel's illustrations are insanely cool and re-imagine some of the most loved (and hated) television characters in a unique and original way. With these prints, Game of Thrones characters will be scrambling to decorate their rooms with the faces of each of these grungy and retro fantasy characters.
2.3
Score
Popularity
Activity
Freshness
Get Trend Hunter Dashboard