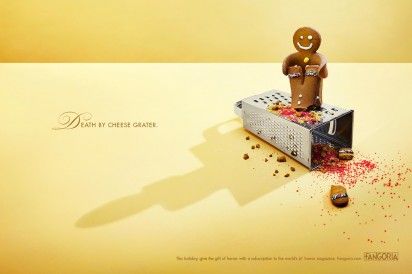 Meghan Young — December 6, 2013 — Pop Culture
References: zulualphakilo & ibelieveinadv
The Fangoria Magazine Holiday 2013 ad campaign mashes a bit of the Halloween spirit with a Christmas one to appeal to its fan base in a relevant way. Not to mention that it is promoting its subscription as the perfect gift for those who love all things horror. It reads, "This holiday, give the gift of horror with a subscription to the world's #1 horror magazine."

From death by cheese grater to death by rolling pin, the Fangoria Magazine Holiday 2013 ad campaign gets very creative when it comes to Christmas-themed torments. Conceived by Zulu Alpha Kilo, an ad agency based in Canada, the print ads were art directed by Mooren Bofill with creative direction by Zak Mroueh. It was shot by Vicky Lam.
3.2
Score
Popularity
Activity
Freshness