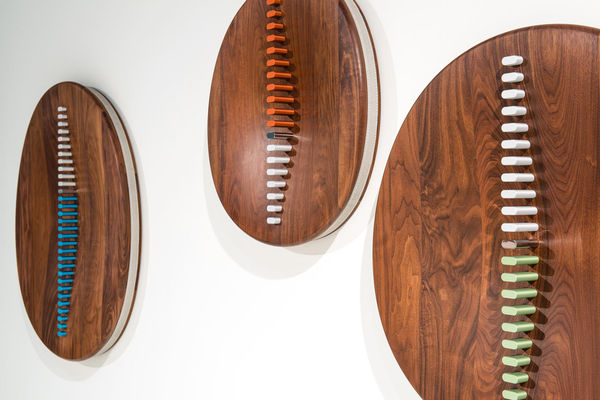 Meghan Young — May 28, 2014 — Art & Design
References: frederickmcswain & design-milk
Share on Facebook Share on Twitter Share on LinkedIn Share on Pinterest
Beautifully symbolic, Family Tree by Frederick Mcswain, a designer based in New York City, is a simple art installation that is inspired by a 1400-year-old Giant Sequoia. Created for Bernhardt, a furniture manufacturer, to celebrate its 125 year anniversary, the installation is modeled after concentric tree rings.

About Family Tree by Frederick Mcswain, the designer says, “When contemplating an appropriate tribute to the generations of Bernhardt craftsmen who carry on the tradition of fine woodworking, this visual was the initial catalyst.” Comprised of six wall sculptures, the installation holds a special spot in both Mcswain and Bernhardt's hearts since they were raised in North Carolina. The aluminum pegs decorating the center are reminiscent of a vertical timeline or a strand of DNA.
2.1
Score
Popularity
Activity
Freshness
Get Trend Hunter Dashboard